I Guess This Is It 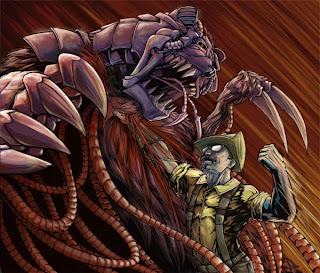 This is Pretty much it. There are probably a few nit picky parts left, so if any of you see anything that might need some attention let me know.
Now I am going to work on my new business cards!!
Posted by Daniel Wood at 7:39 AM 4 comments:

A Bunch Of Things Going On

OK. SO its been a while since i posted anything. In my defense a week of it was because I was on vacation. I visited a friend in Portland for a pretty awesome, wet, week. It was pretty neat being on the west coast. I saw an incredibly clean and green city, saw some some really big trees as well as Haystack rock, which is not only very big, but was also in the Goonies. I further developed my addiction to sushi and wasabi, saw a short mummy, watched some chickens cross a road, saw an amazing animated movie called The Illusionist, and witnessed a homeless couple break up with copious amount of spit flying. Than there was all the inking and drawing. 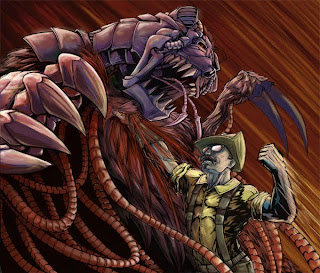 I wasnt able to work on this until i got back from Portland. Sometimes i really wish my Labtop didnt torch its insides. But when i got back, i was able to put a few hours into it. I still have to work on the robo-bear's other arm, and do some things with the background. Other than that, probably a few touch ups. 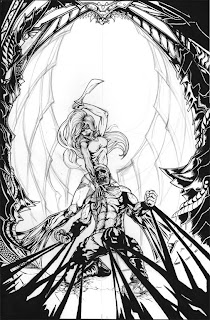 There where plenty of drawing to do without my computer. On the flight over, I started to work on some more Inks. Although, most of the flight I was a bit distracted by my seat neighbor and the interesting conversations we had. The top picture is titled "Bitches Be Crazy." The ultimate goal was to come up with a comic cover concept. I took it further than expected by inking it but o well. There is a little graphite work i would like to do in the background and some more details in the foreground. Other than that, it will be colored if i still have interest in it. 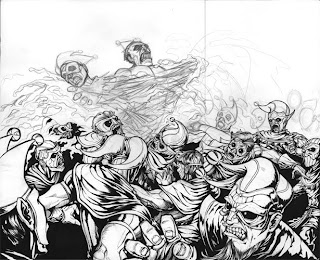 This is the other one I started on the flight over, but worked on it much more than the picture above while in Portland. It is titled, "Murder Parade." I have been juggling this concept around for a while and finally got to it. As you can see, it is only half inked and barely entirely drawn out. I have been noticing that things dont have to have be as drawn out before i ink them anymore. Most of the details and pretty much everything else comes in the inking phase. I feel that I have become quite comfortable and confident with inks. If anything catastrophic happens, there is always white out. Anyways..... i really want to see this picture to the end. Something about it is comically relaxing to me. Its all their cute little faces. 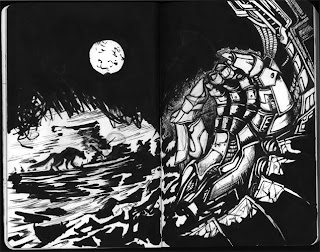 This is an inking in my sketchbook that was revisited over and over during the flight there and back. This started as four separate drawings before i got bored and mashed them together. Try and find the four original sketches. You will get a reward. SATISFACTION!!!
Posted by Daniel Wood at 2:03 PM No comments: