Not too much is different from the color study posted earlier. I just spent some more time on Mr. Roosevelt's colors. There are some shadow parts that can be made darker, but i am trying to avoid having him too dark altogether. 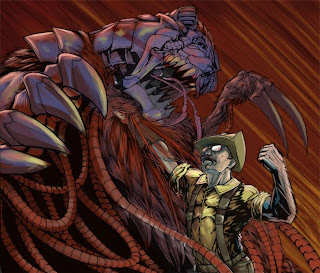 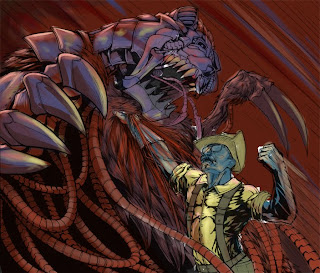 I have a surprise day off of work today thanks to the rain so why not spend the day off coloring one of my inks. Here is the color study for my second teddy picture. I decided that a menacing color scheme was best so i focused in using reds and purples. Of course teddy will be in his usual attire, but a lot less yellow will be present once all the grime is added on. I added some yellow on the claws and metal bits to see if the colors distribution could be spread out more through the image instead of having just teddy as the only source of yellow. The metal yellow might have to be toned down a little.
Posted by Daniel Wood at 12:04 PM 2 comments:

Here is the inked image of the Founding Fathers picture I have been working on. It features Washington, Hamilton, Adams, Franklin, and Jefferson. This is one of a series of revamped historical political figures. For a while I had no idea what to put in the sky. First it was going to be a military helicopter hoovering above, than it was an alien invasion. That didn't quite fit in with the setting that was already there, but i did like the idea of having some sort of futuristic crafts in the sky. Later I decided to full the sky with transport ships evacuating the inhabitant of earth.

Here is a summery: Far into the future, Earth has been overrun by a mutant plague and the remains of humanity if forced to evacuate the planet. A few years before the plague a few of the Founding Fathers returned from the dead to protect and serve. Outfitted with state of the art technology not only to restore themselves but also to improve their capabilities, The Founding Fathers have become an unmatchable force. During the evacuation of Earth, they chose to stay behind and hold off the hordes of mutants until the last ship has taken off. From there they plan to travel the globe and extinguish the mutant threat so that one day humanity might be able to return home.
Posted by Daniel Wood at 7:55 AM 1 comment: