I Travel Through, Towards the Heart of Darkness

Here is a quick update. Just finished a sci-fi/ post apocalyptic/ mechanical jungle picture.  As usual, I like to incorporate a bit of a narrative into my scenery pieces, and this one is not lacking that, although its a bit straight forward.  Anyways, enjoy! 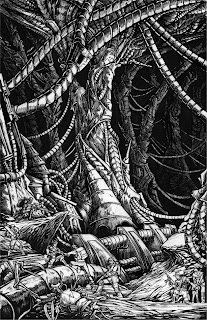 Beneath the vaults of shadow-haunted tombs, I see the fire that burns like the black heart of night.

Here are the colors for the Goatwave and Conana pictures.  I also threw in a little black and white image as well. 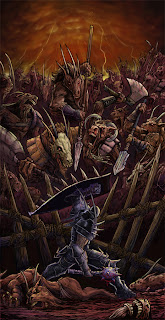 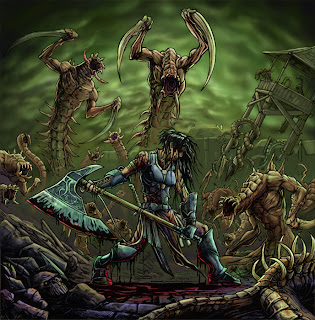 I really love doing these landscape pictures.  Not only are they easy to work on, it adds soo much depth and story to it as well. Makes the viewer wonder what the deal is with the object in the background. in this case, its the massive ruins in the back. Of course their cursed. Has to be. Its standard. 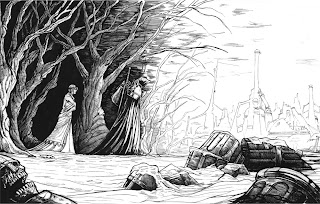 "Do not let your eyes linger young princess. It is nothing but forgotten memories, dust, and shadows.
Evil things that dwell in these dark and silent places."
Posted by Daniel Wood at 9:35 AM 1 comment:

Here is a long awaited update.  Its full of a bunch of inks from various projects. 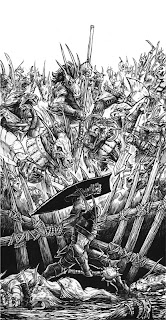 This was absolutely one hundred percent fun. Its also been a long time since I drew ant goat-men, so it was nice go and draw something new(ish). 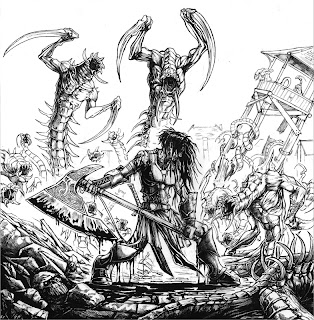 This image was an ink that i worked on in my free time.  There wasn't too much of a goal that i wanted to reach here.  I just wanted to draw a female warrior/ barbarian, and than make it gritty.  Interesting fact. One of the best ways to make something gritty, is to have the character standing in a pool of their own blood.

These two below are a pair of character concepts from a small contract.  It was fun to do because i was pretty much given free reign over the concepts.  There where a few little tweaks, but in the end it wasn't so bad.  When the imges where sent, the little slime guy was not included. 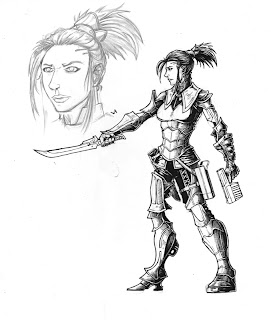 Space pirate concept. Two of her limbs are robotic.  Neat little addition.  Adds a little bit of story to her as well. 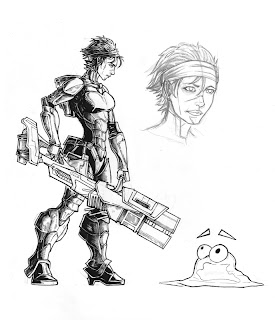