From the Highest Tower to the Darkest Forest. A Peaceful Field Brings No Comfort

Here are some follow up images for the current story I am working on.

Picking up the story where we left off. The knight and the priestess are ambushed by spirits in an old cathedral. With the wisdom he had acquired from the dragon, the knight is able to defeat them with a fearless and pure heart. Searching through the cathedral, the adventurers do not find what they are looking for. Instead, they learn of another possible location for the artifact the knight is seeking. A long forgotten ancient temple city high in the mountains. 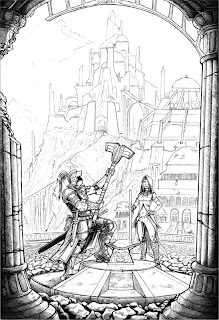 After weeks of travel, they make it to the abandoned temple city still standing tall after a thousand years of neglect. Several days pass until the knight and the priestess find the artifact they have been questing for. A massive hammer with the ability to disenchant and destroy magical items. Such as the chains that bind the dragon. The two leave the old city and head back down the mountain. 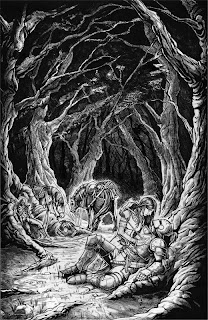 As the two companions make their way back to the valley where the dragon waits, two arrows fly out of the darkness of the forest hitting the knight and piercing his armor. He falls off his horse mortally wounded. Two bandits emerge, thinking that they have dealt with their only threat. When they get close enough, the priestess steals a sword from one of them, and runs him through, pinning him lifelessly to a tree. The other is trampled to death by the adventurers horses. 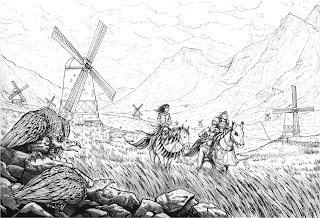 The priestess does all she can to mend the knight, but the wounds are too severe. Both know that the wounds are fatal. The knight and the priestess press on. He must fulfill his part of the deal. He must free the dragon before he succumbs to the icy hands of death. They travel for days, passing through beautiful wheat fields. overlooked my numerous towering windmills. It is a beautiful scene, but death is in the air. Vultures can sense it, and begin to trail the two companions.
Posted by Daniel Wood at 7:41 AM No comments:

Shadows in the Dark

This is a quick post. This image is the next piece in the Knight/Dragon story. While looking for a way to free the dragon from its enchanted shackles, the knight meets a priestess who claims to know what he is looking for. They travel to an old and neglected cathedral, only to be ambushed by a horde of ravenous specters. 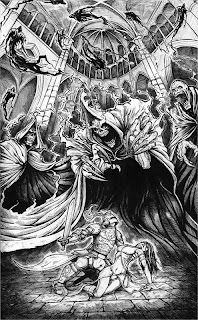