I Have a bunch of things to post today. 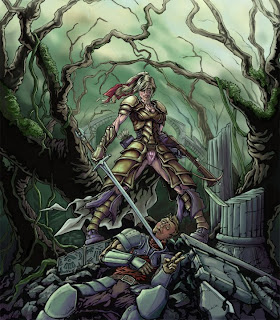 This first one has been deemed finished for quite some time, but I never had the time to post it. It was a rather enjoyable piece to work on, so i might revisit it later and do some tweaks. It is always nice to work on pieces with a bit of humor, even though its a bit juvenile. O... The title is, 'A Sight For Sore Eyes.' 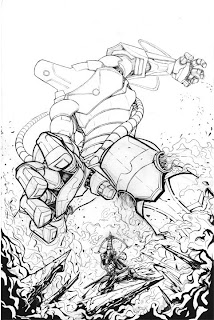 A couple days ago I came to a realization that I have never seriously drawn a samurai. I felt a bit ashamed and began to come up with some concepts and situations for this samurai picture. Somehow a robot squeezed its way into the picture and became an important part of the concept I was fine tuning. Eventually, the robot became a much more massive part of the idea and began to take the focus away from the samurai. In the end though, I believe the outcome is satisfactory. The samurai may not be the only focus of attention, but he still is one and in the end that was my goal. Well ....kind of stretching it a bit, but it works.

I title the piece, 'One For Taking It Down.' When i get to coloring this picture the magical arrow about to be fired will be much more apparent. 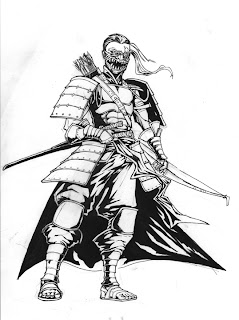 Feeling sorry for Samurai Phil having to share his spotlight, i inked a closer more detailed picture of him. He even has some awesome facial scars and a snarling mask. He looks like someone who could throw down with a giant robot. 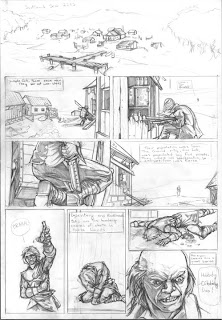 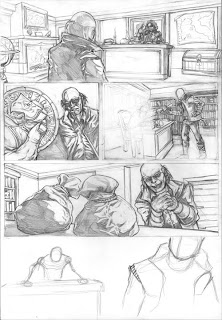 A good friend of mine Invited me to work on a comic with him and a few other people. I will be working on the pencils and and my friend will color over top of it. I am interested to see how the final pages will come out. This is what i have come up with so far.